CALL US FIND US
You Are Here: Home > 2017 Ford Mustang Performance Features

The 2017 Ford Mustang performance features are as incredible as the vehicle itself, and as amazing as what the name evokes. There are supercharged engine and brake options, as well as impressive measures to further augment its muscle on the road. Fuel economy numbers are also worth noting, and another reason drivers in the Glenwood Springs region love this car. Learn more about what makes the 2017 Ford Mustang performance features stand out in its class before heading to Glenwood Springs Ford to put the 2017 Mustang to the test!

The only problem with the 2017 Ford Mustang engine options is deciding which one you should choose. Pick from four solid options depending on your power preference:

While performance-oriented vehicles aren’t necessarily known for their fuel economy, the Ford Mustang has pretty impressive numbers for its segment. The Mustang is designed for adventure and fun, so go ahead and indulge without worrying so much about filling up at the pump: 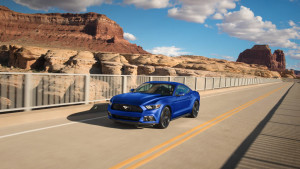 While many focus primarily on strength when it comes to more powerful vehicles, it’s important to consider braking capabilities as well. Braking options for the 2017 Mustang are as high-caliber as all of its other components and will not disappoint Rifle drivers:

Eagle drivers are in for quite a ride thanks to the powerful performance features found on the Mustang. Check out some of the outstanding specs that maximize the Mustang’s command of the road:

If you’re ready to experience a performance vehicle that will turn every daily drive and boring commute into an adventure, stop by Glenwood Springs Ford, located at 55 Storm King Rd., and test out the 2017 Ford Mustang’s performance features! You can check for your favorite trim beforehand by contacting us online, or simply come in see what you like!